Hundreds took to the streets of Paris on Wednesday in honor of the 51st Tibetan National Uprising Day. While holding signs reading, “Stop the Torture in Tibet” and shouting messages of “Hu Jintao: Assassin!”, demonstrators marched along the Seine towards the Chinese embassy, where the group strengthened its calls for freedom.

For the Tibetan exiled community, National Uprising Day is one of the most important events of the year, alongside New Year festivities in February. The day marks the anniversary of March 10th, 1959, when Tibetans in the capital city of Lhasa rose up against their nearly 9 years of Chinese occupation. Despite the Tibetans’ peaceful protest, a bloody battle ensued and almost 90,000 Tibetans were killed. Exiled communities worldwide use the day as a platform to promote justice for Tibet.

Protesters march towards the Chinese embassy in Paris

As per tradition, Tibet’s exiled spiritual leader the Dalai Lama, made a statement from his home in Dharamsala, India. He reiterated his desire for Tibet’s autonomy, despite Beijing’s continually hard-line stand. The Dalai Lama called on Tibetans to respect others, educate themselves and continue working to preserve Tibetan language and culture. He also expressed the need for China’s 1.3 billion citizens to have free access to information and greater transparency within the country.

Tseyang, a board member of the Communauté Tibétaine de France, who jointly organized the Paris demonstration with La Maison du Tibet, hopes that the day’s protest will bring some sort of change within the current Sino-Tibetan dialogue.

“The Chinese government should try to better understand the situation,” she said as she marched, “Tibet and China are in their ninth round of talks and there are still no concrete results.” 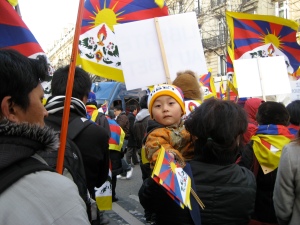 The Dalai Lama sent envoys to Beijing at the end of January to resume negotiations between China and Tibet, which again were fruitless. International intervention has not yet produced any significant change for the Tibet issue, which often gets pushed under the table due to Chinese pressure or in favor of more pressing political concerns. U.S. President Barack Obama met the Dalai Lama last month, resulting in angry reactions from the Chinese government.

Sonam Topgyl, an exiled Tibetan living in Paris, believes that the Uprising Day protest will be useful in its ability to bring light to the situation in Tibet and to show China that Tibetans are still fighting for freedom. “When it comes to politics, it’s difficult. But what France can do is to talk about the Tibetan situation to the rest of the world,” he said. Uprising Day demonstrations were planned for today in cities across France, as well as in other parts of the globe.

Above all, Sonam hopes that talking about Tibet will one day result in real change. Holding his Tibetan flag high in the air as he marched, he said, “What I would like is for Tibet to have the same rights as in France – culture, religion, everything.” 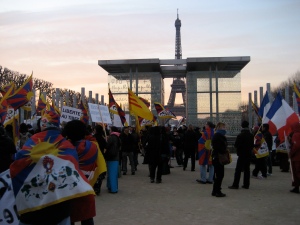 Obama wins the Nobel prize. But will anyone believe it?

Today everyone, even the man himself, seems to be asking…. did Obama deserve to win the Nobel Peace Prize?

The header for Yahoo news is actually: “Surprised, humbled Obama awarded Nobel Peace Prize.” They might as well have ended the sentence with a large yellow exclamation point and a “so were we” in parentheses.

Is a world leader eligible for this award? Yes, we’ve seen it time and again. But has Obama done enough yet to earn it?

Sure, he’s inspired hope in millions and changed the theme of the race wars in America (and abroad). But should the Nobel prize be based lightly on what the guy’s already done and more so on what is expected of him in the future?

Some past winners of the award include the Dalai Lama, Nelson Mandela, Aung San Suu Kyi, Jimmy Carter and Mother Theresa. Now, I love Obama as much as the next liberal, but placing him beside Mother Theresa is a bit of a stretch.

I don’t doubt that in a few years, Obama will have proved his name worthy of being placed next to these world greats. He is already well on his way by improving relations with the Muslim world, pushing for a more comprehensive U.S. healthcare plan, and generally inspiring Americans to do more, care more, and be proud of themselves for once. But view him already worthy of the Prize? No, I can’t.

Sarkozy meets Dalai Lama. But will it be enough?

More and more, China reminds me of a certain wealthy British couple living in the Dordogne, who likes to irrationally throw its money around in lieu of using actual power.

French President Sarkozy met with the Tibetan exiled leader, the Dalai Lama yesterday in Poland, and he’s paying for it. China is threatening to boycott trade deals and pulled out of the China-EU summit in France. Yet, in his direct, calm but forceful manner, Sarkozy told China not to make things “tense” and mentioned that their actions were not based in reality. In the coming weeks, we will see if China is just full of hot air or if they’ll make good on their threats.

As Sarkozy accepted the traditional white scarves, a symbolic Tibetan offering (which he promptly took off his neck and lay awkwardly in a pile to the side) he became the first EU president to challenge China’s threats and meet the Tibetan leader. But where’s the pay off?

As a fervent Tibetan supporter, I will always hold hope that Tibet will one day be free, just as the thousands of exiled natives wish for every day in their new homes in India, New York, Minnesota and beyond. But after the Beijing Olympic Games, where throngs of Tibetans were killed in protest, with no positive outcome, one wonders where the light at the end of the tunnel will be.

It is obvious to me that China is waiting for the Dalai Lama to pass on.

Dalai Lamas are chosen at a young age by Senior Tibetan monks, who use meditation to find the reincarnation of the previous Dalai Lama. Then the children, often as young as two years old, are given a series of tasks to perform (like identifying the former Dalai Lama’s personal belongings) before one is selected.

While Tibetan Buddhism is broken into multiple branches, the Dalai Lama is considered the spiritual leader of Tibet, and unofficially holds the highest position in the Gelugpa sect. Throughout the country’s history, the Dalai Lama has exercised varying degrees of political power, depending largely on the country’s level of turmoil. Alongside him are two other spiritual leaders, the Panchen Lama – the second highest member of the Gelugpa sect, but without civil authority – and the Karmapa, the head of the Karmapa sect.

With the abundant challenges posed by China, the current Dalai Lama is taking on an increasingly important political role, one that many Tibetans worry will not be easily replaced if he should die in the next few years (he is already 73). This sentiment has prompted the Dalai Lama to suggest that he name a successor before his death, straying away from the normal selection process of choosing the next Dalai Lama after the previous one has passed.

For if tradition were upheld, the new Dalai Lama would be but a young boy, without any knowledge of the suffering his people have been through over the past decades. China would finally be able to take full control of the powerless country, as they would have no visible leader for several years.

So while China appears to be in a constant state of “armed and ready to fight,” they are simply biding their time, hoping to throw off Tibet and its supporters until His Holiness meets his final day.

France’s latest ploy to knock China off its haunches will be brief, at best. The two countries will have words, a few more threats will be thrown around, and then everyone will forget about the meeting. If thousands of Tibetans launching rocks at Chinese store windows in Lhasa won’t open up Sino-Tibetan dialogue, I seriously doubt a few white scarves between friends will do the trick.

So, Mr. Sarkozy, the next time Chinese leaders send you menacing messages, don’t let yourself be put on the defensive. Make sanctions against the communist country first so that they are forced to react – and not the other way around.

Unless we pressure China politically, we will never manage to crush their ideology, which is determined to blow out the already dwindling flame of the Tibetan spirit.